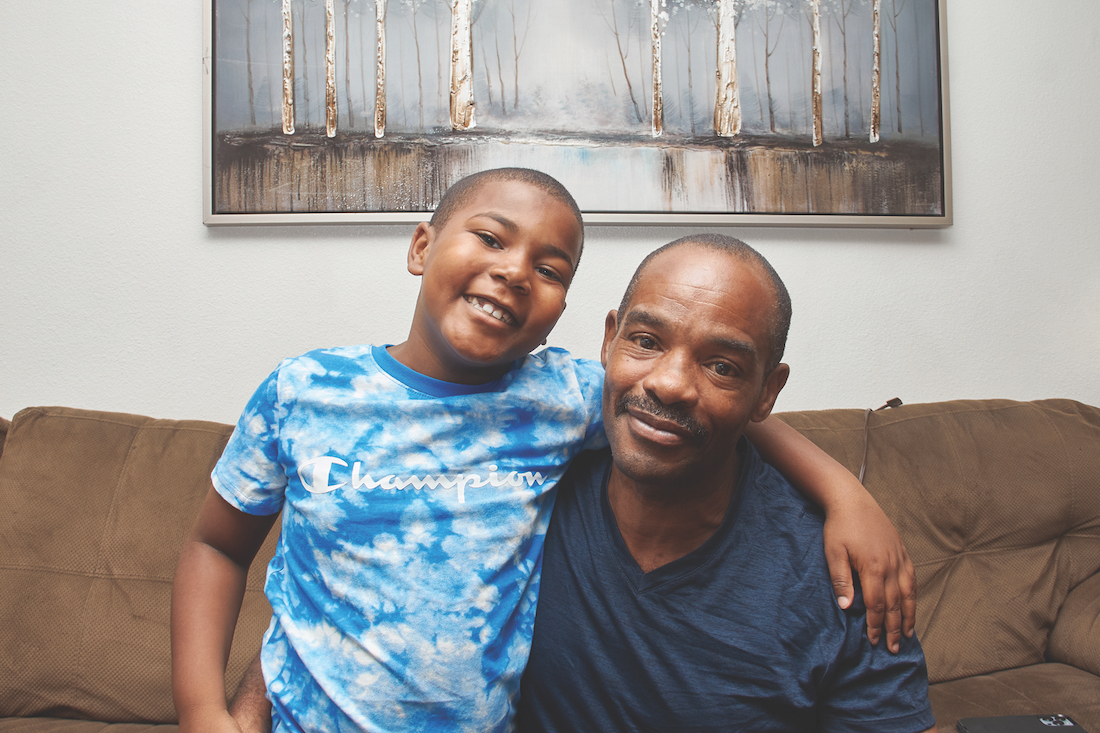 Jerry became a member of Step Up six years ago after experiencing homelessness for more than a decade, and it was the beginning of his new life. Step Up’s Permanent Supportive Housing helped Jerry build a strong foundation in his recovery and most importantly, get his son back.

At Step Up, which offers permanent supportive housing to the unhoused in Los Angeles, eviction is not an option. Instead of kicking out a man who woke up screaming at 3 am every morning, Step Up’s wraparound case management team worked with him – understood him. Yelling was a survival mechanism he learned while experiencing homelessness. With just a few weeks of mental health support, the screaming stopped.

The team at Step Up understands that when people are given housing first, healing follows. And it works. Ninety-eight percent of people housed with Step Up stay housed for at least a year.

“It takes up to a year for people to unlearn survival skills that were helpful to them on the street,” says Step Up President and CEO Tod Lipka. “The outcome we are working toward is a sense of belonging, and ultimately recovery.”

Step Up provides member-driven services to people experiencing serious mental health conditions and chronic homelessness with the goal to help them recover, stabilize, and integrate into the community. Their unique model makes an incredible impact on the communities it serves, including homeless veterans, youth transitioning out of foster care, unaccompanied women, and other adults.

“So many people say that Step Up saved their lives,” Lipka says. “It is wonderful to know that we are making an impact in such a meaningful way.”

The nonprofit has successfully housed or found housing for more than 1,850 people in California, as well as in Tennessee, Florida, Georgia, and North Carolina. Their model of creating housing by converting blighted motels is one-third the cost of building the same apartment-style developments from the ground up and takes one-third the time. It has become a model for the state’s Project Homekey.

“In the ‘90s, we realized that you can’t solve homelessness without housing,” Lipka says. “What people received was usually an ascending level of services: food and clothing, then shelter, then temporary housing, then maybe permanent housing. The people who needed it the most rarely ever got housing.”

With Step Up that is exactly what our neighbors are getting and the results are transformational.

Step Up delivers compassionate support to people experiencing serious mental health issues, and persons who are experiencing chronic homelessness, to help them recover, stabilize, and integrate into the community. Through dynamic partnerships, we provide positive social and learning environments, vocational training, permanent supportive housing opportunities, and recovery services to empower individuals to cultivate lives of hope and dignity. We exercise innovative leadership and advocacy to increase public understanding, support, and acceptance of all people living with serious mental health issues.

When I left rehab, I was told that if I had a place to live, I could get my son back. Honestly, I didn’t have much hope. I had experienced homelessness for so long that I didn’t think anyone would be able to help me. But after a few phone calls, I met Brittany from Step Up. Within a few weeks I was signing a lease and nine days later my son came back home to live with me. That wouldn’t have been possible without Step Up. When they handed me the keys, that turned everything around. They helped me believe that I could change my life, and when you start to believe, anything is possible.

Home for the Holidays — Help Save a Life This Holiday Season

You can help save the lives of thousands of our unhoused neighbors this holiday season.

Envision a world alongside Step Up where everyone has access to mental healthcare, a safe home, and the opportunity to live a fulfilling life. You can help ensure that people are surrounded with compassion, essential supportive services, and most importantly a place to call home.