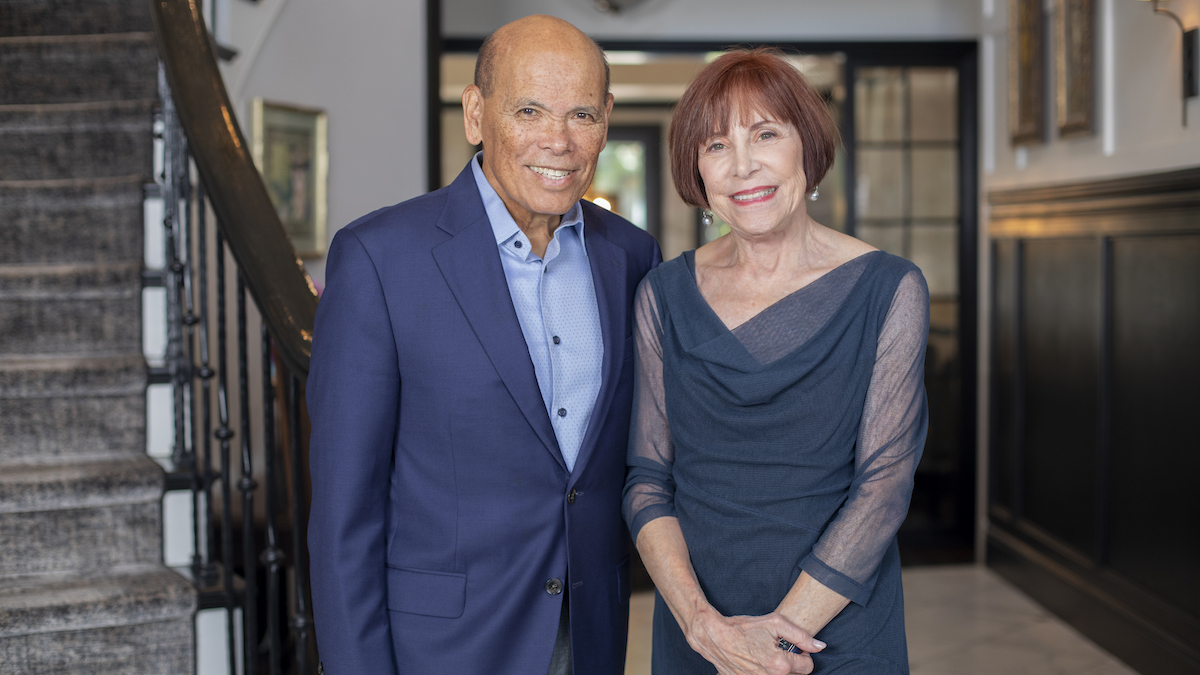 In his childhood, Milton Valera lived near the airport on the Garden Island of Kauai, where at a young age, he had started setting his internal clock to a very specific hour.

“This is a true story,” Valera says. “Seven o’clock on Kauai was very, very significant for me, because at seven o’clock in the evening, the last plane left the island. And, as young as I was – I don’t know, I was eight years old – I just felt trapped until seven o’clock the next morning when a new plane would come back in.”

“I mean, talk about ridiculous,” he laughs, something he is quick to do. “But that’s just the way I was.”

Many decades and thousands of miles removed from that little boy, Valera, now 80, wears the years and the miles with the kind of ease a life well-lived can earn you. We are talking on a sparkling, early autumn afternoon that finds him and his wife, Debbie, comfortably perched on a lush, leather couch in the living room of their Woodland Hills home. Debbie, as we’ll see, has traveled just as far as Milt to get here.

For the Valeras, paradise is where you make it, and these two found it in the San Fernando Valley, where they have become important civic benefactors and community-minded philanthropists, focusing their giving primarily on education and on improving opportunities therein for foster children.

The foremost object of their philanthropic affection has been California State University, Northridge, or CSUN, to which the couple donated $11.1 million in 2020 to support a variety of programs and colleges across the often-overlooked, higher-ed powerhouse that is home to more than 34,000 undergraduate and 4,000 graduate students.

CSUN is one of the engines that drives Milt and Debbie’s beloved San Fernando Valley and the entire region. Milt will let you know that nearly one-fourth of the county’s CPA firms are headed by CSUN grads, and with more than 50 percent Hispanic enrollment, it ranks as one of US News & World Report’s diversity leaders. It also ranks consistently high in social mobility.

Not to mention, In the late ‘60s, CSUN was one of the epicenters of the Chicano/a Rights Movement, part of the larger Civil Rights Movement pushing for access and equity for underserved communities.

Milt Valera happened to graduate from CSUN in the fertile year of 1968, the year African American and Latino students demanded better student and faculty representation and educational support services at CSUN and schools across California. The university responded by initiating the Educational Opportunity Program (EOP) to help attract and retain traditionally under-represented and poorly served students. CSUN now has the largest Department of Chicana/Chicano Studies in the country. It also boasts the EOP Milt and Debbie Valera Resilient Scholars Program, which provides higher education and advancement opportunities for, perhaps, the most underserved community, emancipated former foster youth.

Unlike his boyhood days in Kauai, Valera has not once thought about straying more than a few miles from campus since he graduated from CSUN.

“It just never occurred to us to go anywhere. This is our home. This is where we like it,” Valera says. “I went to school here; we have our business near here. It’s not unusual for me to spend three, four days on campus, just with professors and other people.”

Debbie, who hails from just outside of Pittsburgh and graduated from Syracuse University, says she’s kind of adopted CSUN as her surrogate alma mater. “I think what Northridge has to offer is just incredible,” she says.

One of the things it has to offer is a terrific undergraduate journalism program. And that’s what Valera found himself gravitating to when he arrived in Los Angeles in the early ‘60s, though it wasn’t supposed to be this way. He was meant to stay close to home and go to the University of Hawaii. Two weeks before enrollment, though, he decided he had to tell his mom he was going to leave the island to pursue his dream of going to the mainland.

“Well, I did break her heart,” he confesses. “I said, ‘You know, Hawaii’s nice, but I can always come back here… I gotta go to the mainland.’”

Valera had been accepted to the University of Oregon, among other mainland schools, but by the time he made his decision to venture to new horizons, enrollment was already closed. Los Angeles Community College, though, had rolling enrollment and, also, a strong contingent of kids from Hawaii. Valera says he had a lot of fun hanging out with his islander friends in the big city, but remembers, too, being somewhat in awe.

Valera, who was passionate about sports in his youth – in high school he’d thought he “was going to be the big jock” but “realized I wasn’t, you know, good” – kept close to his passions by writing about them for the school newspaper. After moving to Los Angeles, he worked for a couple community newspapers while attending LACC. When he matriculated to CSUN, he majored in journalism. After graduating, Valera worked for the dearly departed Los Angeles Herald Examiner and had a stint with the Los Angeles Times before it dawned on him, earlier in his career than most, that “if I was going to stay in journalism, I wasn’t going to make any money.”

An Empire of Signatures

Valera smartly started his own public relations and marketing firm in the ‘70s, which led to gig writing a newsletter for the National Notary Association, initially founded in Chatsworth in the late ‘50s by Raymond Rothman as the California Notary Association. The association was something of a hobby for Rothman, whose primary business interest was insurance. With millions of notaries across the country needing services and support, Valera saw the potential in growing the association and professionalizing the sector. When Rothman was ready to retire, Valera bought him out and took over the association, which had about eight or nine employees at the time.

Today, the National Notary Association has more than 300 employees providing professional services to about 4.4 million notaries in the U.S. The growth is just part of the story, though. Valera also played a critical role in establishing professional standards, educational services for notaries, and in generally improving remuneration and respect for notaries public.

“People out there who were notaries were dying for education,” Valera says. “I might add that today we have notaries making over $100,000.”

Among its many services, the association publishes the National Notary Bulletin, a weekly newsletter, and The National Notary Magazine. Some time ago, the magazine needed an editor. “So, I started advertising for an editor for our magazine and, lo and behold, Debbie answered,” says Milt, laughing.

While interoffice romances have pretty much been consigned to the dustbin of history, that used to be how you met your wife. There, or at a bar. Besides, Debbie was more than qualified for the editing job. Writing for her high school newspaper, she’d already traveled from Pittsburgh to Florida to cover vice presidential candidate Edwin Muskie as he stumped for his running mate in the 1968 presidential election, Hubert Humphrey.

A journalism major herself, after graduating from Syracuse University, Debbie cut her teeth on the murder-and-fires beat at the Beaver Falls News Tribune, near Pittsburgh. She finally escaped the low skies and terminal gray of the inland Northeast and made it to L.A. in the early ‘70s. After working in local journalism, she met Milt and eventually took over editing the association’s publications. Currently, she’s executive director of the National Notary Foundation, the philanthropic arm of the National Notary Association, for which Milt still serves as chairman.

These days, though, most of the couple’s time is spent giving back to the community they are both grateful to for having provided a bounty of opportunity for them. It starts with CSUN, where their gifts have supported the business school, the library, the performing arts center, journalism and education departments, and, of course, the EOP Milt and Debbie Valera Resilient Scholars Program.

In recognition of their contributions, CSUN named its administration building Valera Hall and the lobby at the Soraya Performing Arts Center is now the Milt and Debbie Valera Lobby.

The Resilient Scholars Program builds on the couple’s involvement with a similar program at LACC called the Guardian Scholars program. “Foster youth are one of our primary targets for philanthropy,” Valera says.

The programs focus on pathways to education and social mobility for a former foster youth, a segment of the population that is too often bereft of resources and left to triage its own needs – starting with food and shelter. In those circumstances it can be hard to imagine how, where, or when college fits into the picture, but Resilient Scholars provides guidance, mentorship, and financial support spanning preparatory courses through community college to attaining a bachelor’s degree.

Having matriculated from LACC to CSUN himself, Valera is a true believer in the critical role the outstanding community colleges in our region can play in building better lives than ones we might have imagined possible. He’s living proof and he’s not afraid to say so to guidance counselors and unsure foster kids.

It’s not surprising that a couple of journalists are all about education. Valera also serves on the board of the Kauai High School Foundation, his alma mater. He and Debbie also endowed the Alliance Milt and Debbie Valera Middle Academy, part of the Alliance Marine-Innovation and Technology 6-12 Complex, a college-prep charter school in Sun Valley, with 92 percent Latino enrollment.

Milt and Debbie are far from billionaires and their giving goes much deeper than getting their name on a wall and calling it a day.

And? “I’m encouraged with what I see out here.”