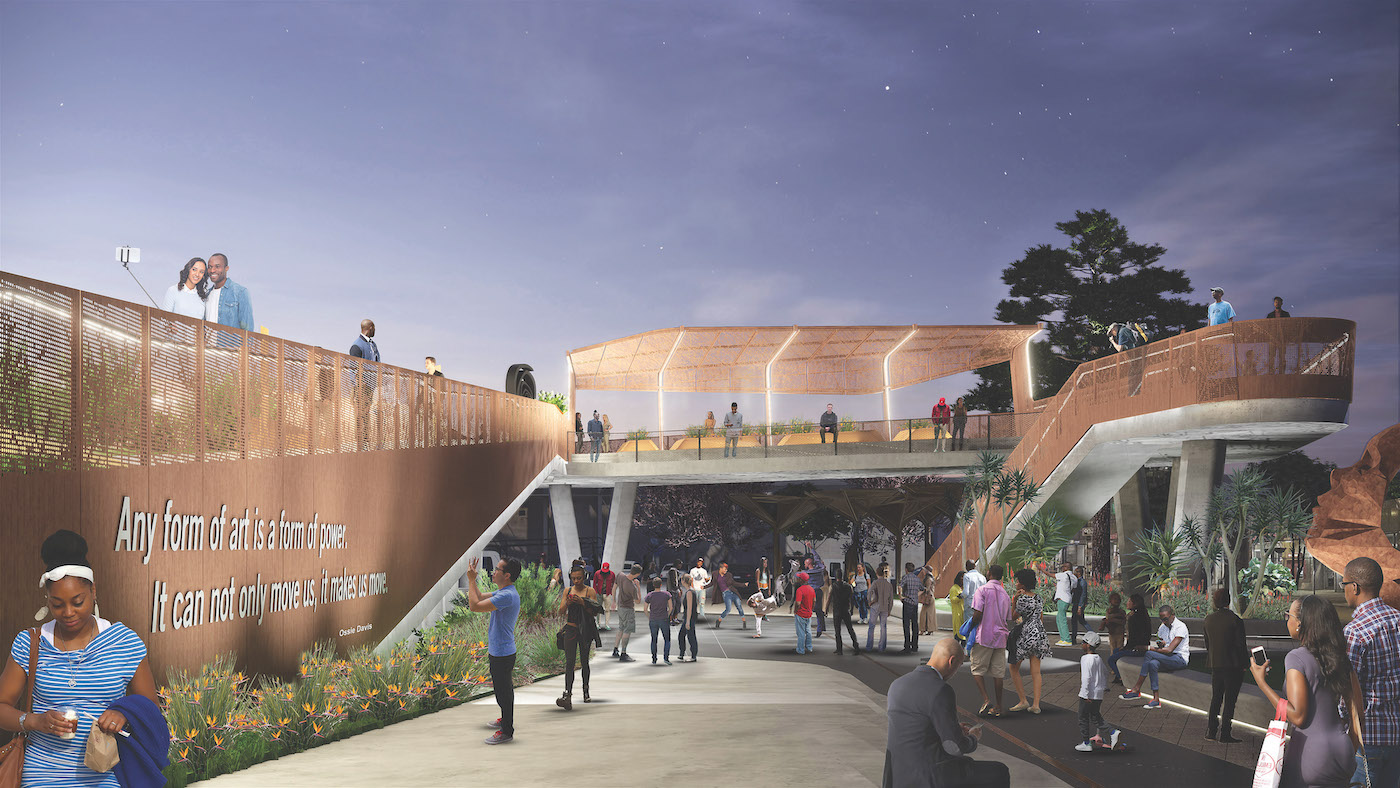 Destination Crenshaw, is a potential game changer for South Los Angeles. Once complete, the 1.3 miles of Destination Crenshaw will boast more than 100 commissioned works of Black art, 10 pocket parks and community spaces, cultural stamped infrastructure (including sidewalks, wayfinding signage, and street furniture), and hundreds of trees in the heart of the city’s Black historic district once construction wraps in late 2022. Through art and design, the project aims to stamp the boulevard with a visual celebration of the creative contributions Black Angelenos have made to the city and to the world. A parallel and equally important component of the project is Destination Crenshaw’s economic agenda, which is to create careers for local residents, and offer critical support for both legacy small businesses and young entrepreneurs.

“How do we improve systematically oppressed communities and serve as an answer to the cultural erasure and displacement that Black and brown communities experience and keep people there?” asks Jason Foster, Destination Crenshaw’s president and chief operating officer. “That’s something that Destination Crenshaw is working toward and will accomplish with our project.”

Destination Crenshaw intends to economically revitalize the area in a way that will benefit the historic community’s existing residents. It’s a goal the organization plans to achieve with the backing of community members who have weighed in on the project through an advisory council that formed four years ago. That guidance and grassroots support is essential to the project because Destination Crenshaw is a concept that arose from strong community sentiments regarding the Los Angeles Metro’s nearly complete $2.14 billion Crenshaw-LAX light rail line and its potential to displace local businesses and residents.

The brainchild of Los Angeles Councilmember Marqueece Harris-Dawson, Destination Crenshaw instead wants to create “permanence” for the Crenshaw District’s Black community.  Its “unifying narrative” highlights the migration experience of thousands of Black families who moved to Los Angeles generations ago in search of a better life. The project’s unifying narrative is based on the Giant Star Grass, which served as bedding on the ships that transported enslaved Africans across the Atlantic to the Americas. That grass is now found in every U.S. state and represents a definitive link to the greater Black experience in America.

“All the design elements of our project are based on that unifying narrative,” Foster says, “so that the community can understand that the story of the project is actually their story, directly addressing cultural erasure and really, hopefully, being an answer to the gentrification question that typically happens when public investment occurs.”

As Destination Crenshaw is prioritizing community members’ opportunities to benefit economically from the project, they’ve set an ambitious goal of hiring 70% of its construction workforce locally. Ideally, Foster would like to see projects similar to Destination Crenshaw appear in disinvested African-American neighborhoods nationwide.

“We want to create a way for people to have a North Star and really be able to understand that it is possible to improve your community,” he says of scaling the project for other cities. “It is possible for Black people to live in a beautiful environment.”

Destination Crenshaw is a reparative development project and will be the largest Black public art project in the U.S. and quite possibly the world. Ultimately, the project will commission more than 100 works by Black artists who have strong ties to Los Angeles, creating a pipeline of work and jobs for emerging, seasoned and internationally renowned artists. But the project is so much more than art. It’s mission is nothing less than to place a cultural stamp of Blackness on Crenshaw Boulevard – a stamp akin to those in Chinatown, Mariachi Plaza, Koreatown and other ethnic enclaves.

Destination Crenshaw has allowed me to grow my business and plan for future visitors to the Crenshaw community.

Improving South L.A. and the Career Paths of Its Residents

Destination Crenshaw is seeking $400,000 in the coming year to expand its workforce development program with an eye toward hiring even more locals.

Funds would allow the nonprofit to recruit up to 100 more workers into its pre-apprentice program, enable more workers to apprentice on its revitalization of Crenshaw Boulevard, and place more people on construction projects throughout the region.

“We have to acknowledge that to improve our community, we have to also improve the opportunities to access careers for our residents,” says Jason Foster of Destination Crenshaw, who’s also a resident of South L.A. “In the midst of these ever-increasing costs of living in our city, DC’s approach is to focus on permanence for our current residents.”

Public Donors include The City of Los Angeles, the State of California, the U.S. Department of Housing and Urban Development, and METRO.