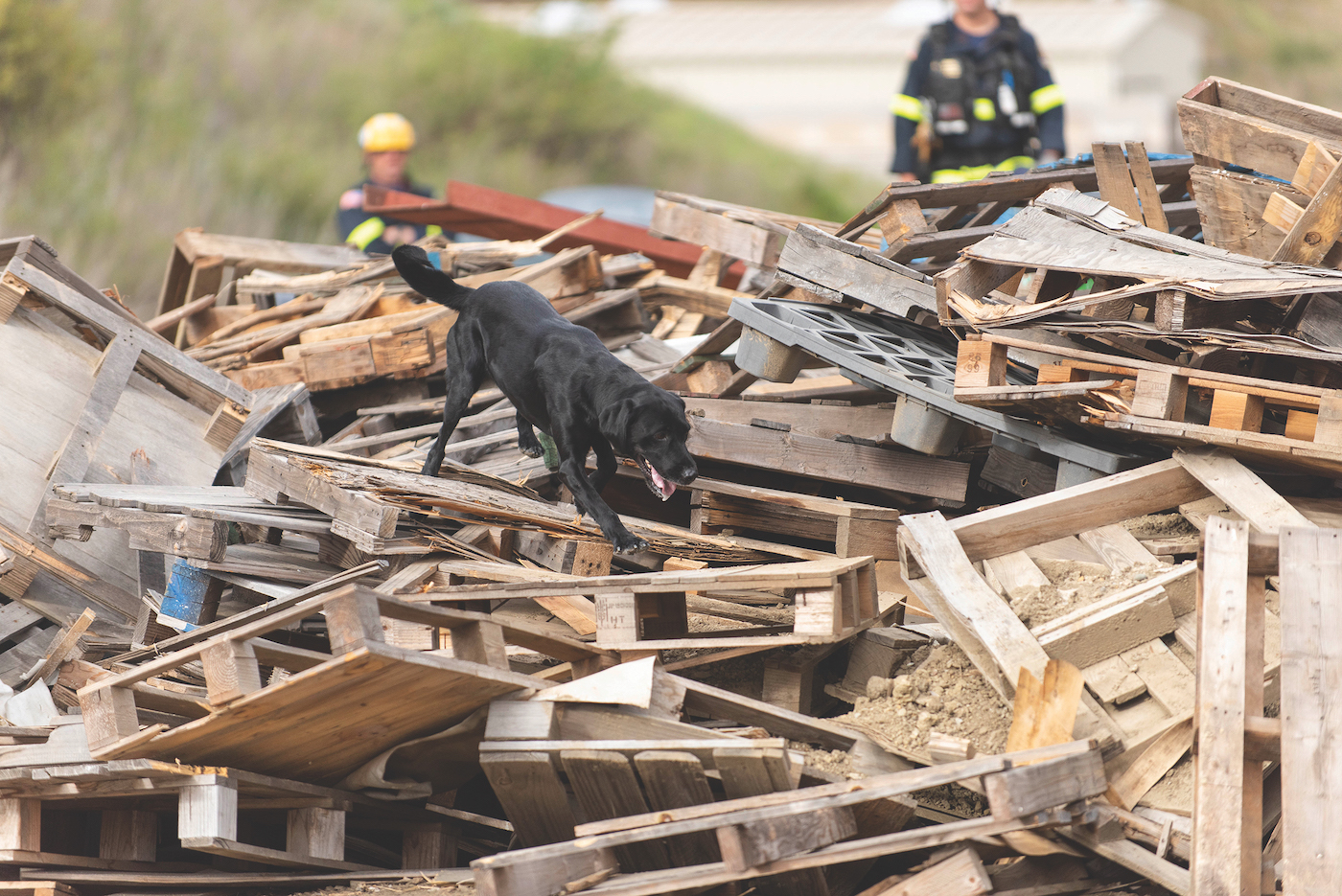 Although you’ll seldom see them in comic books, search dogs are the closest thing to real life superheroes. Not only do they rescue people from crumbling buildings and sunken towns, but they also have a life-saving superpower: a wickedly sensitive nose that can detect and locate disaster victims from hundreds of yards away.

Los Angeles is home to one of only two internationally deployable human-canine search and rescue units in the whole country. Teams like these are deployed all across the world, providing their skills to any county, country, or continent in need. But these canine superheroes wouldn’t be nearly the paragons they are without the proper training. For the elite dogs skilled-up by the National Disaster Search Dog Foundation, this means boot camp at this nonprofit’s staging facility in the sprawling hills of Santa Paula, California.

The foundation was started by Wilma Melville in response to the devastating 1995 Oklahoma City Bombing. Melville and her search dog Murphy were one of many search and rescue teams wading through the rubble that day. But the destruction was greater than anyone could have anticipated. Melville knew then that, as a civilian, she was not as well equipped for search and rescue as a first responder or firefighter would be. In the wake of what she’d seen, Melville made it her mission to pair highly trained search dogs with experts in disaster relief.

Twenty-five years since its inception, the foundation continues to stay true to its mission: Rescue dogs. Rescue people.

“It was Wilma’s vision to rescue dogs and pair them with firefighters with specialized training,” says Denise Sanders, Senior Director of Communications & Handler Operations. Most of the dogs that come to the nonprofit are rescued from shelters, where many face euthanasia. Once on campus, the foundation’s caring staff provide the dogs with life-long medical support and a specialized training regimen that prepares them for the day they are paired with a handler. From there, the human-canine search teams train together on a variety of simulated natural disasters.

While robots have a place in disaster rescue operations, nothing compares to the combined skill of a highly-trained dog and its partner.

“Robotics and machinery are getting better. Technology is getting better,” Sanders says. “But dogs are still the best resource that an urban search and rescue task force has to quickly locate victims buried in the rubble.”

First responders depend on these dogs because they can accomplish what no available technology can. The dogs can move over all terrain, provide emotional support to disaster victims, and, critically, the dogs can survey a disaster area more quickly than any robot.

When time is of the essence, first responders rely on their dogs to locate disaster victims safely and efficiently. Although human-canine search and rescue teams are challenged by each deployment, where they must enter a new and unpredictable disaster situation, these life-saving task forces are bolstered by their world-class preparedness training at the Search Dog Foundation.

Our mission is to strengthen disaster response in America by rescuing and recruiting dogs and partnering them with firefighters and other first responders to find people buried alive in the wreckage of disasters.

Over the years, the Search Dog Foundation has paired many canine disaster search teams that serve the Bay Area and we are grateful to have these canines as a resource to call upon when needed for our urban search and rescue team as part of the San Francisco Fire Department and California Task Force 3. The search dogs are a vital part of any deployment response – whether earthquakes, hurricanes, mudslides, or missing person searches, these highly trained canines are instrumental in completing our search missions. The Search Dog Foundation provides these canines as invaluable assets for our department and part of Task Force 3 free of charge, ensuring we stand ready to serve our community when called upon to help.

Saving Lives, Both Human and Canine

The National Disaster Search Dog Foundation has rescued and trained 279 dogs that have, in turn, rescued humans in disasters. Over 26 years, these expert teams have worked in the largest disasters: from 9/11, Hurricane Katrina, and the earthquakes in Haiti to missing persons and small structure collapses throughout the country.

The foundation has pioneered a model for screening, training, and providing a lifetime of care for each dog it rescues, along with ongoing expert support for handlers.

But the U.S. only has half the amount of search teams truly needed. The National Disaster Search Dog Foundation has a goal of training 20 teams in the next year, while ensuring every dog that enters its program will be successful, whether as a disaster search dog or in another career, by fostering the bonds that will create the next generation of working dogs.

With a gift to the foundation, you can save lives both human and canine.

Be Part of the Search today.